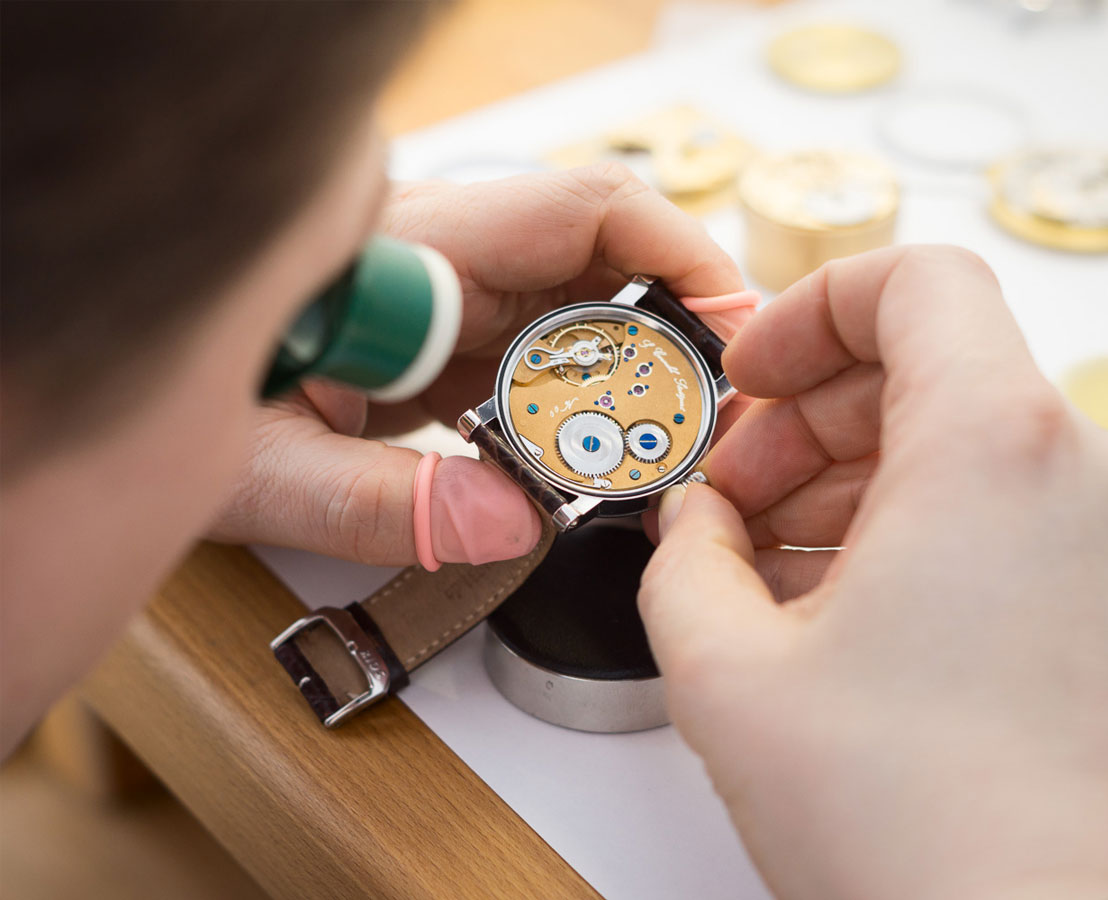 As luck would have it …

a German watchmaker travels to St. Petersburg, Russia in the late nineties. Like many curious tourists, he visits the legendary Peterhof, the “Russian Versailles”. When the expert sees the extensive and exquisite collection of clocks, he asks irritatedly: “Why do all these movements stand still, why aren’t they running?” The simple answer of the museum’s staff: “We have no one who is able to repair them.” This is when the specialist has an idea: He quickly involves renowned colleagues who are organized in a professional group. Since that day, the horologists travel to St. Petersburg once or twice a year to make the impossible possible – with expertise and stamina.

Steffen Cornehl from the east of Stuttgart is one of them. He says: “I have been part of this project since 2002. During this time, we have worked hard to bring about 200 old clocks back to live. They can be visited in the permanent exhibition of the castle.” Just like his connection with the Peterhof Palace, Steffen Cornehl’s life story is marked by coincidences before he succumbed to the charms and mysteries of old clocks. 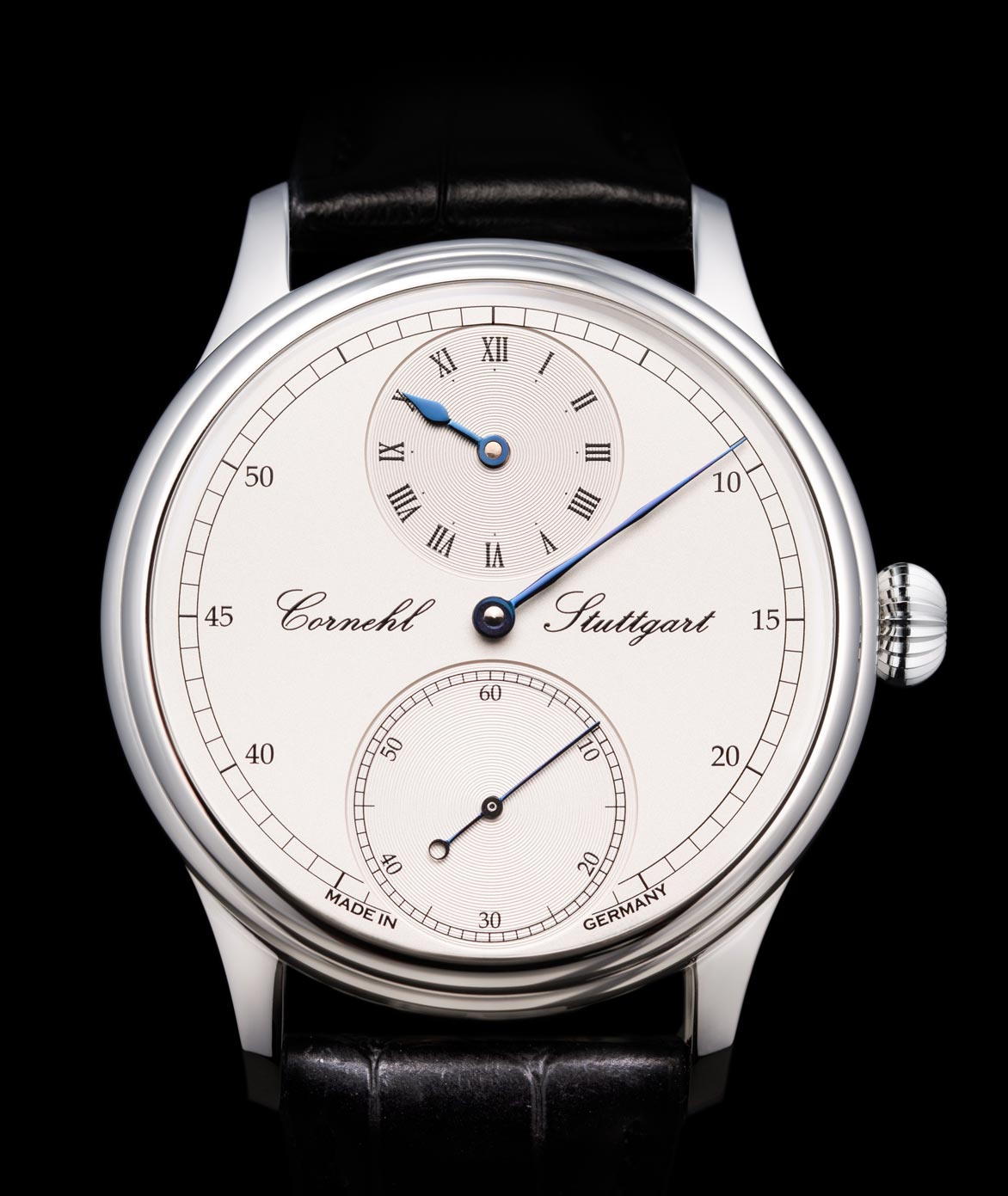 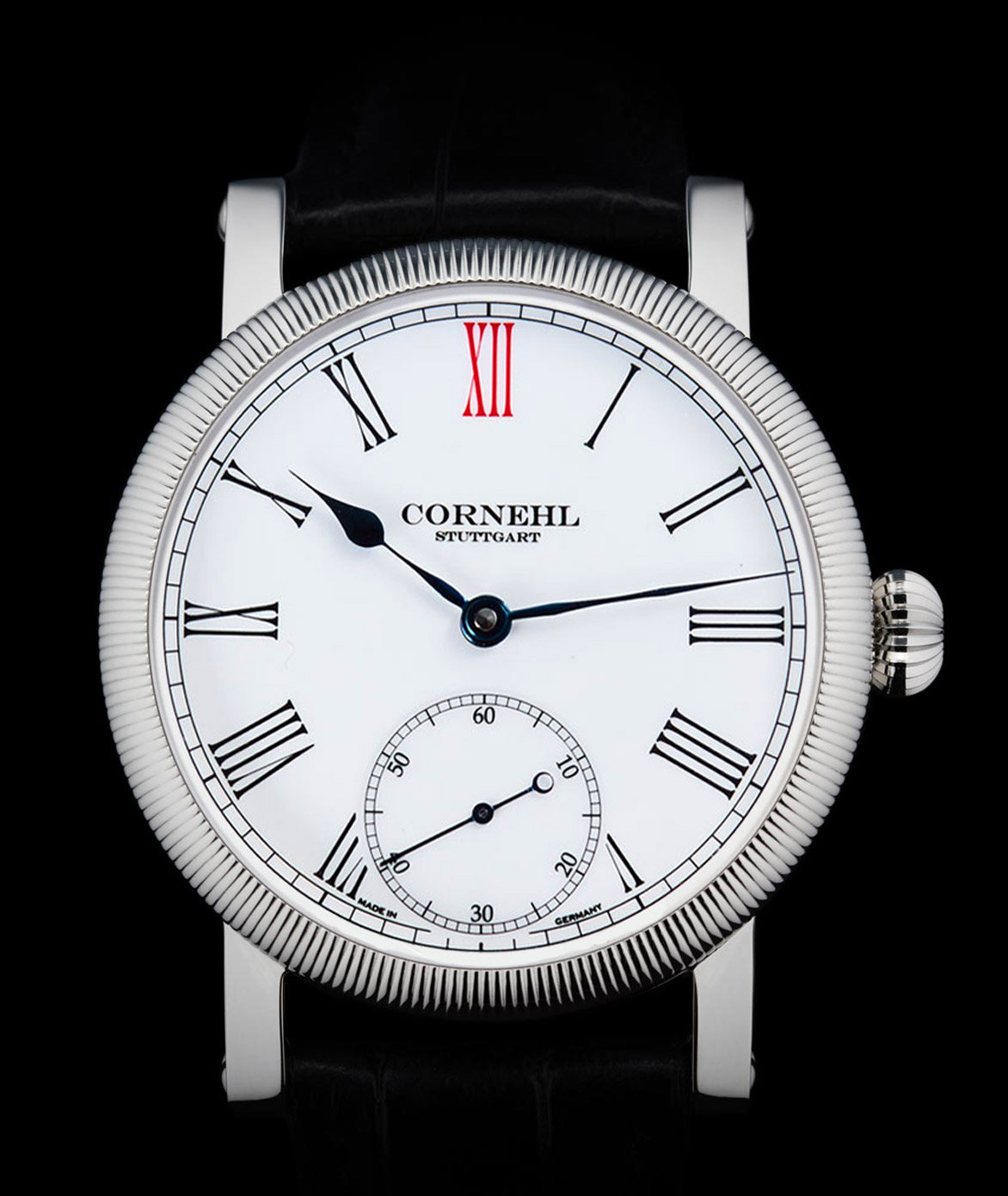 He comes from a 200-people village in Mecklenburg-West Pomerania, where his parents had their own bakery and pastry shop in East Germany. Of course, his father would have preferred to see his son follow in his footsteps. But the years after the German reunification offered completely new opportunities to the young man. “Moreover,” Steffen Cornehl admits, “I did indeed want to work as a craftsman like my father, but I did not want to work on weekends.” The fact that the busy watchmaker now often has to do just that is probably fate.

First, however, Steffen Cornehl becomes a retails salesman in Lüneburg. It is during his three-year apprenticeship with a jeweler that he gets hit with an idea: “When I saw the guys sitting in their workshop repairing clocks, I thought: They really like what they do, I want to try that, too.” Later, at the watchmaking school in Hamburg, it becomes apparent that he has the necessary talent for the delicate work: “For my profession, you need technical understanding – and you need a knack for it.”

Does Cornehl, who got an award from the Chamber of Crafts as an apprentice and in 2001 completed his master craftsman degree with honors, see himself as an artist, artisan or as a craftsman? He pauses for a moment: “I don’t really see myself as an artist, but our work definitely has artistic aspects.” What counts most when dealing with old clocks from the 18th and 19th century is experience, a certain feel for the art of watchmaking during this era and finally, the intuition of how to get these treasures up and running again. But no, he wouldn’t go as far as saying that old clocks have a soul.

What brought him to this almost endless and quite special field was his search for the extraordinary, says Cornehl. Repairing standard watches day in, day out did not appeal to him. In addition, the demand for the repair of wristwatches clearly has clearly decreased during this era of cellphones, tablets and smartphones.

So back to St. Petersburg,

where Steffen Cornehl is working again during these July days. During the initial years of the project, Cornehl and his colleagues went there in four groups of ten watchmakers – for two weeks every summer. And what are the much-quoted conditions? “Basically, we are working as volunteers. We pay our own flights, get modest accommodation in an old building of Peterhof Palace’s park and very good food,” says Cornehl. In addition, the guests from Germany are treated to an extensive cultural program – concerts, theater and ballet. But of course, their work on the rarities from Tsarist times takes priority, he emphasizes.

In one of the many buildings of the huge park, the German specialists have set up their workshop: “Everyone brought their own tools, because the historic watches cannot leave the country. If necessary, we bring spare parts from the West. Everything is handmade, we even have to manufacture many components ourselves because they don’t exist anywhere else – quite a laborious job that demands sophistication and resourcefulness.”


The mechanical timepieces by Steffen Cornehl ensure long-lasting joy and precision for their owners and generations to come. We therefore offer a 3-year warranty for our watches. High quality is a vital part of our philosophy. We continuously invest in long-term relationships with our customers.

This warranty is part of the Cornehl Care Service Program which was created to help our clients better understand and take care of their watches.

Included in the price

The palace at the Gulf of Finland

The specialists decide which of the rare clocks and watches they repair. Cornehl can hardly estimate the extent of the collection of clocks from the Tsarist times – vague sources speak of at least 350 items. In any event, he and his colleagues will have plenty of work for many years to come. There are still a lot of clocks stored in the museum’s depot.

All clocks that have been repaired, including many curiosities, go back to the exhibition to be seen by the visitors. Hundreds of thousands come to Peterhof Palace every year, which is situated thirty kilometers outside of St. Petersburg. It is one of the touristic centers in Russia, located directly at the Gulf of Finland. Tsar Peter I. had it built starting in 1714, it was inaugurated in 1723.

His successors and heirs turned it into one of the largest and most beautiful baroque ensembles in the world and a central place in Russian history. Its huge water games are famous. In 1990, the 200-hectare facility was declared a UNESCO World Heritage Site. 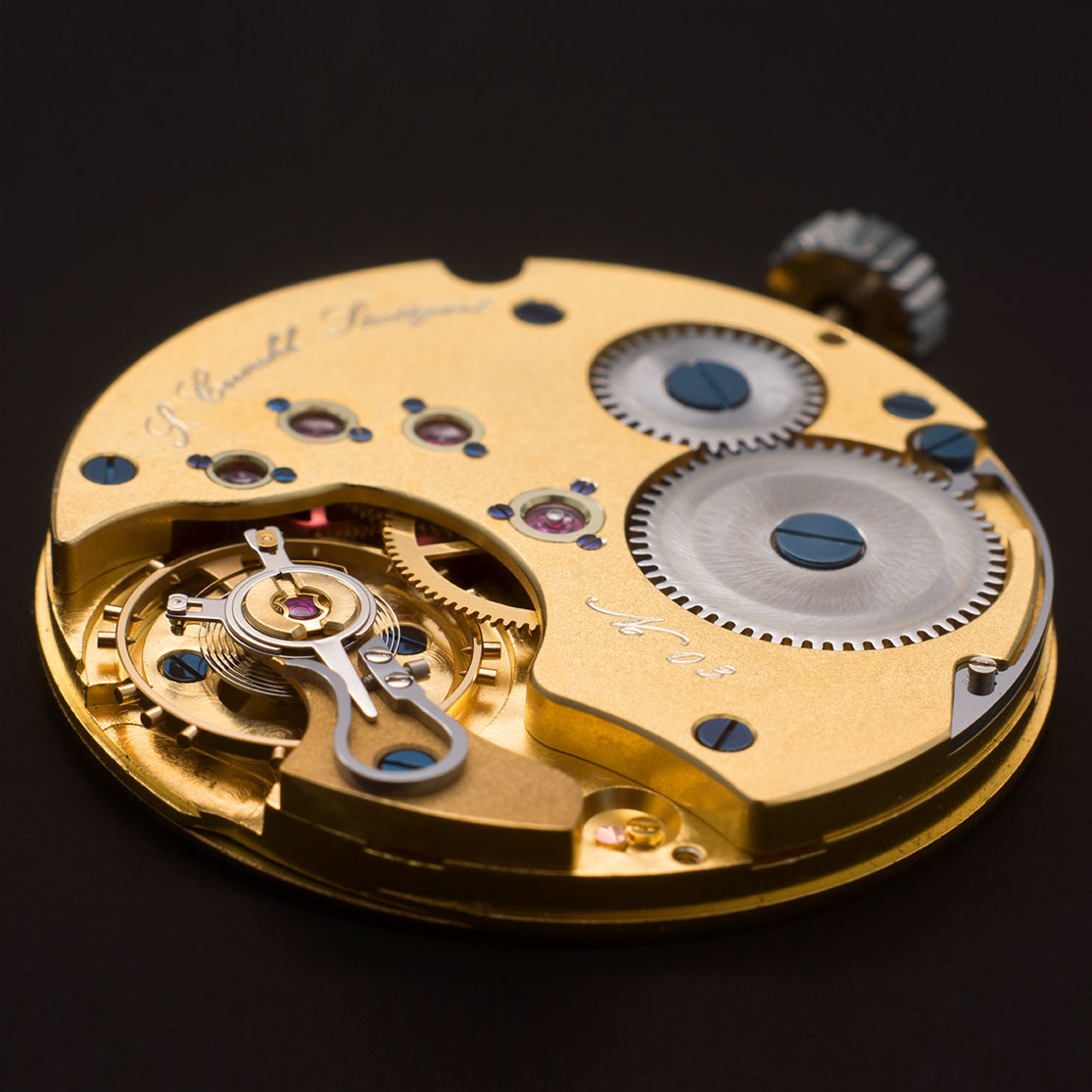 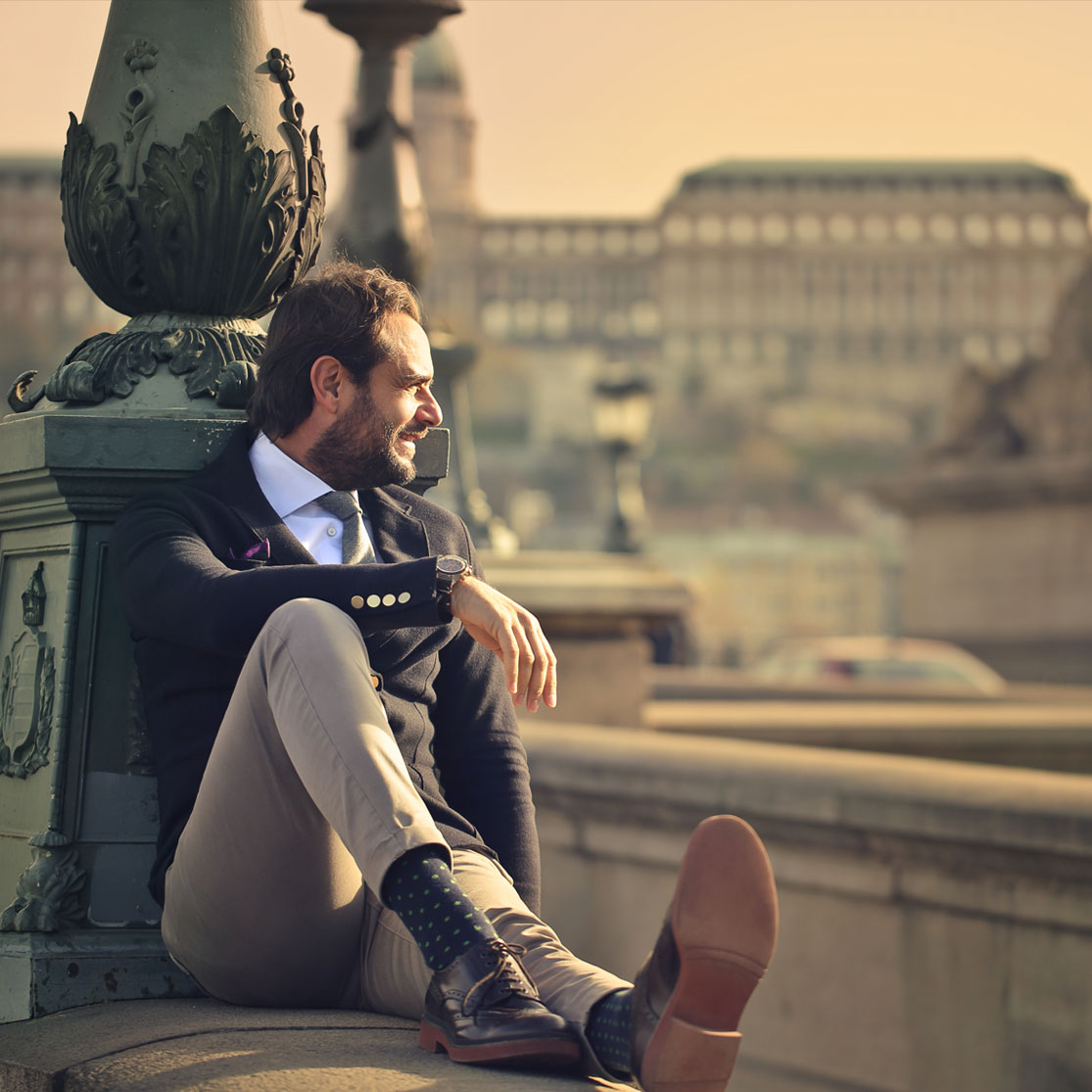 The master watchmaker from Stuttgart does not worry about the value of the treasures that come from all over Europe. “Of course, the value of the collection is in the millions. But that is not important since nothing will be sold.” Naturally, the value of the big and small treasures, from the historic pocket watch to the massive clock, increases when they keep time again. And the recognition of those who have brought them back to their technical life grows – at least among experts.

The names of those who belong to the “Expert Group on Historical watches”, a registered association, enjoy a good reputation. Some of them work for the Maharaja of Jodhpur in India. Recently Cornehl went to Moscow, where a museum is interested in his work. Even in Germany, there are collectors who appreciate the knowledge of the experts.

“I haven’t done any research on the topic, but I think it is possible there is also looted art among the pieces,” says Steffen Cornehl. However, for him personally it is not about political or historical aspects: “Of course, we watchmakers from the West know that the German army occupied Peterhof Palace and did nothing to extinguish the fire that broke out. Maybe some of the older colleagues contribute their work to make amends.” Cornehl however, the youngest among all the restorers, does not have such feelings:

“I completely approve of it being volunteer work, but I also appreciate it as a great personal opportunity for training and further development. The experience I gain at Peterhof Palace is very valuable for my professional career.”

Since 1998, Cornehl has lived and worked in the east of Stuttgart, where he ended up after stops in Reutlingen and his studies of mechanical engineering and business administration in Esslingen. At Rossbergstraße (now: Schwarenbergstraße) he has his own workshop. His plans for the future are precise: “The historical clocks remain a focus of my work. But I have strong intentions of designing and manufacturing my own exclusive series of watches.“ The sportive watch on his wrist was made by himself. Of course.

Performance adjustments
after the first 3 months

Our sample watch service is a special offer for all those who cannot visit us in Stuttgart. Here is how it works:

For insurance reasons the sample watches are without timekeeping function.

We offer a special service for all those who cannot visit us in Stuttgart: our example watch service. We send you a set of 1-2 watches to try at home.

We consult with you via phone once the watches are in your hands. After that a carrier will pick up the watches from your home.

For insurance reasons the example watches are without function. 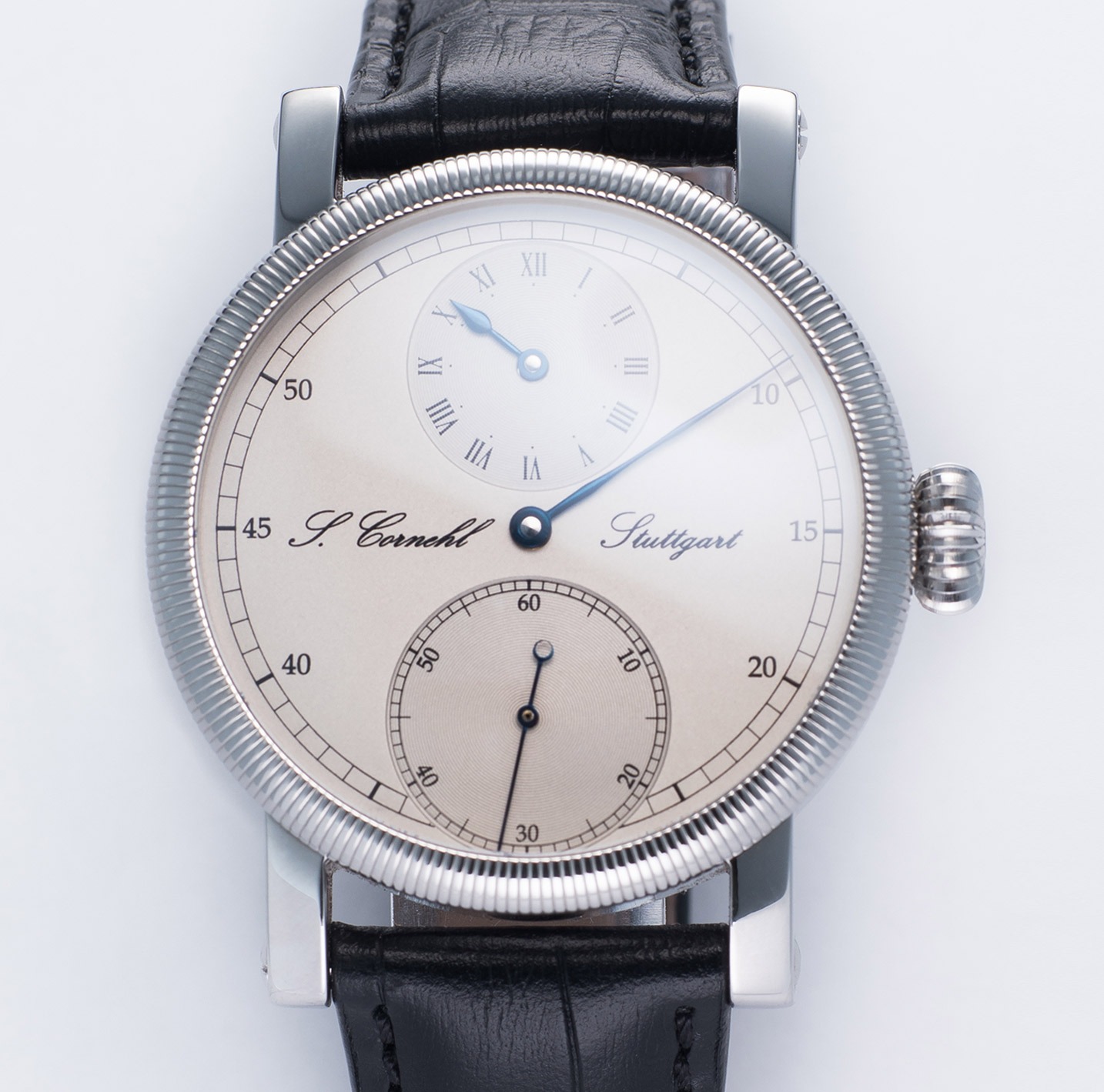 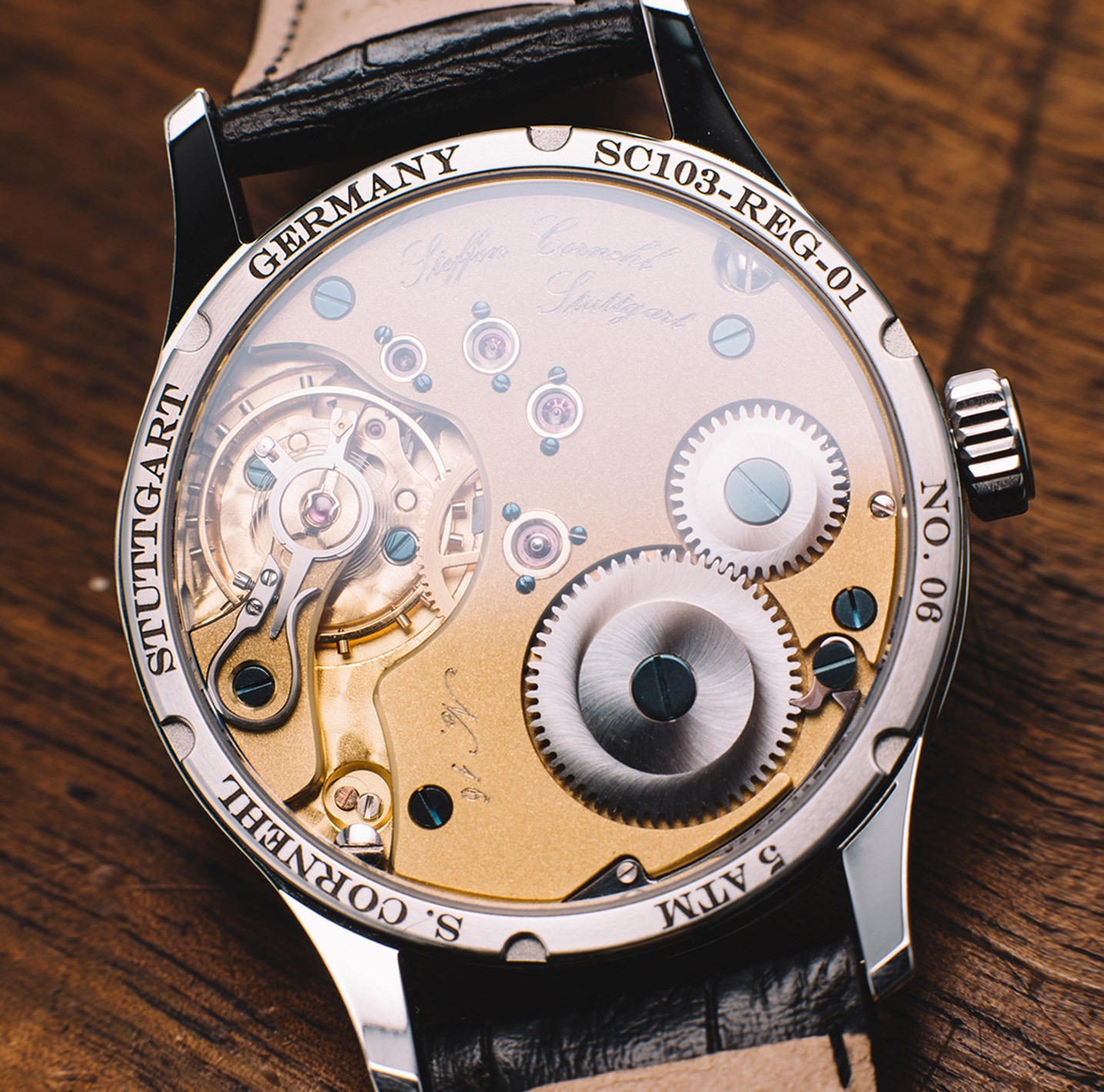 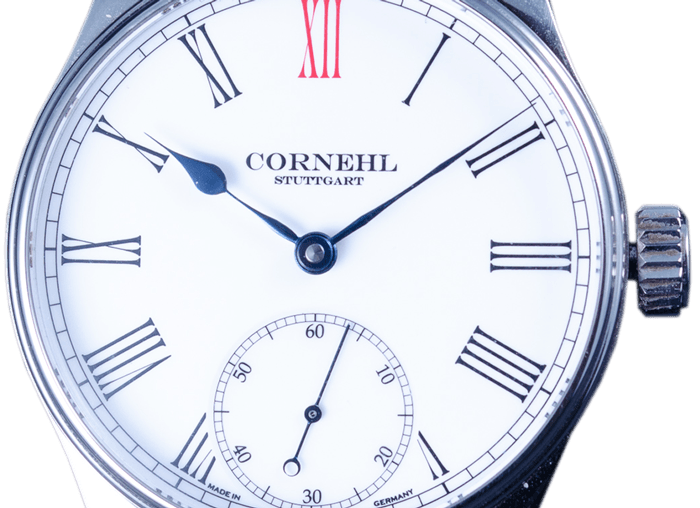 Model of the month